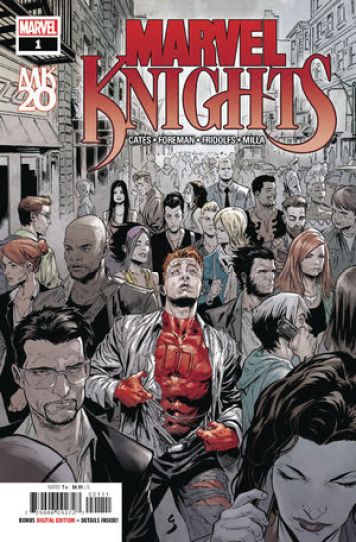 Imagine yourself waking up not knowing who you are and why you’re sitting in a cemetery over the grave of some person you can’t remember. Then suddenly, an officer shows up with ‘Castle‘ on his uniform and tells you that he’s awakened and knows who you are. There you go! You’re now connected with Matt Murdock. You’re literally sitting in his shoes right now.

Matt wakes up over the gravestone of Karen Page. He has absolutely no idea who he is, why he’s there, and what he’s doing. What a terrible way to wake up. And…when he’s told he’s not yet awakened, he freaks. WHOA! What does that even mean?!

Marvel Knights 20th is a great compliment to its predecessors. The story has an old-school feel to it and looks like Donny Cates has a good story for us. The artwork, by Travel Foreman, has a very retro feel as well. His depictions of Matt Murdock are on point for what’s happening in the story. Matt’s facial expressions during what’s happening may not be the most flattering for an image, however, it is the most flattering for what’s going on in the story. Nice work Foreman!

The story is intriguing. There’s a lot of classic Daredevil characters and more Marvel characters thrown right into the mix very early, however. While we all know these characters and love them, I am left to wonder just how big this is going to get. How many characters are we going to see in this story? Don’t get me wrong, Kingpin is one of my favorite villains ever. (Check out my article “Why do we love villains?“) Not just him, but some of my other favorite Marvel characters are in here as well. I don’t feel that it’s overkill as Donny Cates did a good job making it all tie-in. It just leaves me wondering if they’re getting introductions out of the way so we can get to the meat of the story in later issues, or if this is going to have the “who’s who” cast of heroes, anti-heroes and villains in it.

Without giving any spoilers about who it is, I do love the supervillain introduction at the end. If you’re a fan of villains and want the bad guys of old in your story, you will appreciate it as well.

I give Marvel Knights 20th #1 four couch cushions out of five.